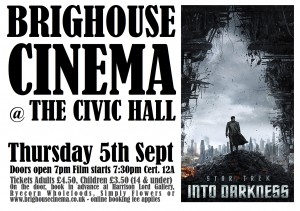 When the crew of the Enterprise is called back home, they find an unstoppable force of terror from within their own organization has detonated the fleet and everything it stands for, leaving our world in a state of crisis. With a personal score to settle, Captain Kirk leads a manhunt to a war-zone world to capture a one man weapon of mass destruction. As our heroes are propelled into an epic chess game of life and death, love will be challenged, friendships will be torn apart, and sacrifices must be made for the only family Kirk has left: his crew.

The needs of the many outweigh the needs of the few. Few understand the meaning behind this Star Trek (or more accurately, Charles Dickens) sentiment better than J. J. Abrams. Rebooting Gene Roddenberry’s seminal ’60s TV show following years of variable movies, Abrams’ first voyage on the USS Enterprise rescued the franchise from its increasingly niche fan base, the kind of people who endlessly debate Sisko versus Janeway (answer: Picard), and made it cool for everyone. Star Trek 2.0 (or XI) eschewed the speechifying, arthritic cast and bad hair of the previous flicks, upped the energy, vibrancy and spectacle, but still managed to respect Roddenberry’s dramatis personae, if not his spirit. Into Darkness follows exactly the same principles. Only more so.

Tearing a page out of the Raiders Of The Lost Ark Blockbuster Playbook, we start at the shattering climax of a Trek adventure we’ll never fully see. Looking down on a planet rich in garish scarlet fauna, a shaky camera picks out Kirk (Chris Pine) and Bones (Karl Urban) legging it for their lives, away from an angry pack of white-faced, yellow-hooded natives but towards a sheer drop that spells certain death. If that’s not enough, Spock (Zachary Quinto) is being parachuted into a volcano to calcify the lava and save an entire planet. It’s a ludicrously enjoyable piece of action cinema with a gloriously cheeky ending. We’ll be lucky to see a more exciting, breathless set-piece all summer.

Yet rather than pausing for breath, Star Trek Into Darkness punches it and immediately turns into a manhunt movie. A bomb goes off in a Starfleet archive in London — 23rd century England will boast a skyline of Gherkin buildings apparently — and the race is on to track down the terrorist, well-coutured renegade John Harrison (Benedict Cumberbatch). Abrams’ first Trek movie was criticised for not following the Roddenberry tenet of holding up a mirror to real-world issues. Into Darkness couldn’t be more prescient. Just weeks after the events in Boston, this keys into a hunt for a bomber, with Kirk given orders to forgo a fair trial (“I’m gonna run this bastard down”) and terminate Harrison with Star Trek’s version of extreme prejudice — undetectable photon torpedoes. There will soon be students getting 2:2s for dissertations with titles like “7 of 9/11: Bin Laden, Star Trek And America Into Darkness”.

Cumberbatch’s Harrison may be dressed for a GQ cover but he is, in essence, a one-man army — watch him waste a garrison of helmeted marauders or take a vicious beating from Kirk with barely a flinch, or brutally batter some Federation flunkies. Yet, as you might expect from an actor who can comfortably portray Sherlock Holmes and Stephen Hawking, Harrison is as cerebral as he is muscular. His overall master plan may share some of the bonkers logic of Silva’s cockamamie Skyfall schemes, but Cumberbatch’s detached quality staves off hokeyness. It is a testament to the power of his performance that, although his early appearances are greeted with the most over-the-top Evil Musical Motifs imaginable, he manages to make Harrison ambiguous and chilling throughout.

If the first film was about the coming together of the Enterprise crew, then Harrison’s threat means they have to divide to conquer. The strong ensemble — rejoice in the growing Kirk-Spock bromance, or Bones’ bad aphorisms, or a collector’s moment of Sulu steeliness without his sword — have etched likable sketches of the nascent TV icons, but you’d like time to hang with them a bit more. Similarly, you pine for a sustained Hannibal Lecter-Clarice Starling duel of wits between Kirk and Harrison, but it never quite happens. Abrams has real skill at dropping character beats in the heat of battle — Kirk and Spock get slivers of interesting arcs; the former is learning to become a captain, the latter is learning to be a friend — yet the film doesn’t give the emotions space to resonate and take hold.

As with the first movie, there are some callbacks to Trek history, both TV and film; some are smart and subtle, others feel blatant and misjudged, and might send the hardcore seeking kolinahr. Yet more than the first outing, this engages with Trek’s long-held thematic ideals, be it the importance of the Prime Directive (don’t interfere with alien cultures) or the dynamics between instinct versus logic, pacifism versus savagery. Still, Abrams never lets respect for Trekkiness poop the party. Keep your ears peeled for a fabulous joke at the behest of an iconic sound effect.

Happily, this sense of play is all over Into Darkness. It’s sexy, both literally (Kirk in a three-way with alien chicks with tails) and figuratively: cinematographer Dan Mindel gives everything a sleek sci-fi yet somehow still warm look. Abrams directs with lots of flare (forget 3D glasses, take Ray-Bans), but, more importantly, flair. His style is somewhere between the machine-tooled work of Cameron and the manic intensity of Bay, efficient but still loose and seemingly improvised.

Working with screenwriters Roberto Orci, Alex Kurtzman and Damon Lindelof, Abrams can flip between different tones in a heartbeat — a comedic lovers’ tiff in the midst of battle turns into an affecting meditation on fear — and will leave no stone unturned in trying to entertain: tense bomb disposal, intense inter-race negotiations, big ship-little ship cat and mousery, Simon Pegg comic relief, a chase at warp speed, disaster movie mayhem and Alice Eve in black skimpies just skims the surface of it. Not all of it works — compared to the opener, the last-reel action is enjoyable rather than jaw-dropping — but there is the sense of a true showman at work. Like Lucas, Abrams doesn’t care about science-fiction, cold fusion thingamys and transwarp doodahs. He just wants you to have as much as fun as humanly possible.
Verdict
If this is Abrams’ final frontier, he has left Star Trek in a good place, both in the fictional universe and as a franchise. In some sense, the title is misleading. Into Darkness is a blast, fun, funny, spectacular and exhilarating. The rule of great even-numbered Trek movies continues. (Empire)